4 incredibly creative CVs to inspire you

A creative role sometimes calls for a creative CV – and these four job seekers didn’t disappoint!

We get all sorts of CVs dished up to us, but none come more palatable as young London-based graphic designer Lotti Haxell‘s Edible CV.

Lotti has cleverly mixed her creative flair by printing her CV details onto clear plastic paper to carefully cover up takeaways boxes.

Not stopping there, the young designer ordered a large quantity of fortune cookies and had her “Wunder Grafik” details printed inside, filling each takeaway box. After everything was ready, she distributed a box to her pinpointed and very hungry agencies.

Wondering whether all of her hard work was worth it?

Un/fortunately I was hired about a week later so I still have about 300 of these cookies going stale in a create in my room.

Indeed Lotti landed herself a placement at the Design Awards body D&AD from her CV. It served as a “springboard for someone fresh out of uni”, she admits. Thanks to her constant dedication to all things creative Lotti hasn’t been out of work since. She is currently a senior creative at a tech startup based in London’s rejuvenated and robust Shoreditch district.

It look days, a heavy chunk of my student loan and several bottles of red wine to get all those bad boys finished. It was only after I finished the project I found out loads of people find fortune cookies repulsive too haha ! More for me then!

But love or hate fortune cookies, we think Lotti’s efforts to publicize her creative profile, while making sure every finest detail is taken in account, prove not only her skill to create something original and at the same time try to satisfy a very insatiable industry.

You can check out the creative works of Lotti from her Behance profile page here.

The Jedi’s Creative CV: May the force be with him

Edgar Felix’s CV had been nominated last year in an election campaign to find the most original creative CV of the year. So what’s so special about Edgar’s CV? It’s a Star Wars action figure highlighting the young digital designer’s profile.

So basically you got a really fun and creative way to tell everyone who you are and what you’ve been doing, and another to reveal a very strong Star Wars childhood passion. 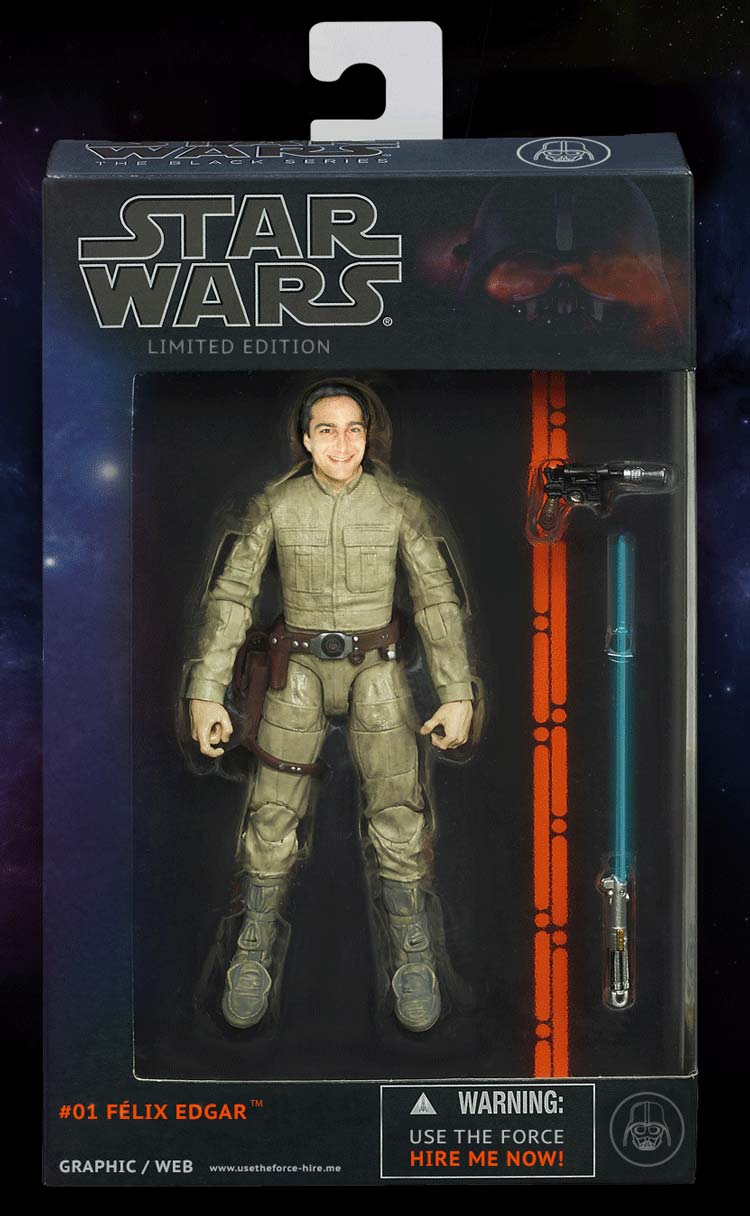 (No, you’re not dreaming, the eyes do wink at you!)

You then have a classic CV presentation featured on the back of the Star Wars CV box, which is bound to satisfy any recruiter.

We caught up with Edgar, who gave us a few insights into what motivated him to embark on this adventure.

So what spurred you to make a creative rather than a more traditional CV?

I guess the area of work I’m gearing towards is not really the traditional CV candidate arena, it’s completely the contrary, the more creative you are the better. We’re finding more and more top competition in creative CVs, so having something with a difference is vital.

Why the Star Wars theme?

When I was doing some research for my CV, I wanted something different that hadn’t been done before. I wanted something that would really create a buzz and was known to all. I grew up with Star Wars like most people and always wanted to be a Jedi, a passion that has always been close to my heart.

Do you reckon the theme gels with looking for a job?

I had to create a “link” between the concept and the storyline of my job application. When we’re applying for a job we just really want to be the “Chosen One”.

Did you really have the action figure made up with all the packaging or was it a mock-up just for the web?

Unfortunately no, it was just too damn expensive to make. The packaging, on the other hand, was made and sent out to some companies.

How did you talk about your CV?

So if I understand correctly, a good aul sword fight is needed when you’re negotiating a salary for a job with your future employer?

Of course, I’d have two so as to double my salary.

Have you been successful with your application? Have you had any feedback, young Padawan? [/YodaMode]

Of course Master Yoda, I’m looking for a a job in Digital Design. I’ve heard from some people but nothing concrete so far. Let the balance be restored, Master.

So here’s a CV that is in a category of its own, such is the originality of Lloyd Daniel‘s creativity that dares to go below the belt (or would that be leash) than others. Oh yes, cause Lloyd decided to publicize his CV credentials in the form of a fresh tray of Dogs Bollocks.

To land that internship in an advertising agency, the young Londoner knew he needed to create something that would stand out from the pack!

Of course playing with the English slang the Dogs Bollocks, meaning the best thing ever, Lloyd used this expression to conjure up a meat product resembling the typical packaging we’d see in our local supermarket. The labels play their part in depicting his background with familiar product titles, the testicles, make up for the rest.

Lloyd dressed as a post man and personally dropped the packs to targeted agencies. His idea also went viral via his Twitter account@LOYDtheCREATIVE

A small note was attached to his Dogs Bollocks CV: “A simple email would have done the job, but how many of them do you get everyday? An application you’re not going to forget. Lloyd.”

“Weiden + Kennedy seemed best pleased with receiving a pair of testicles but in the end told me I needed a portfolio to back up my balls.”

Despite being a bit in your face and a bit gross, personally I have to say that we have to take hats off to Lloyd for, well, having the balls to carry the entire project through. You see this is what creative CVs are all about, daring to rattle a few feathers to showcase your talents, while still having respect for the people receiving your application. Although Lloyd didn’t land his internship, the feedback he got from W+K was priceless.

You can view his Behance page here.

So what about you, would you have the balls to go this far?

The Godfather of all CVs!

This amazing eye-catcher was sent to Portuguese agency FunnyHow. The advertising agency distinguishes itself from the rest by depicting a very dark world mafia style front image and this example may just be the thing worth mimicking, if of course you want to work for this very creative ad agency.

Let’s take a closer look at the CV which was shipped in parcel mail to FunnyHow to get a bigger picture:

We’re not too sure that wanting to work for “the family” comes risk-free, but young graphic designer Bruno Simão certainly wants to play his “Godfather” part and try his hand working at FunnyHow.

You can only imagine the surprise when the agency received the Kraft envelope containing Bruno’s CV, a package completely in line with the style and feel of the “Goodfellas” agency itself. An offer, like this, you can’t refuse!

With a message like “Can I be part of the family?” you see when you open the parcel, it’s hard to fault Bruno in the way he respected right to the finest detail to mirror the agency he was targeting. After taking a glimpse of his work from the images above you can appreciate the effort and determination of this candidate to be apart of “the family”

Check out Bruno’s profile too on Behance here. You can find a range of free creative CV templates to get you started here: cvtemplatemaster.com. You can find more guidance on preparing your CV here.

Originally written by Peter and Alain Ruel for Creative-Resume.net.

Let’s brag about – your achievements